Back in the Pink: Pacific Salmon Redux 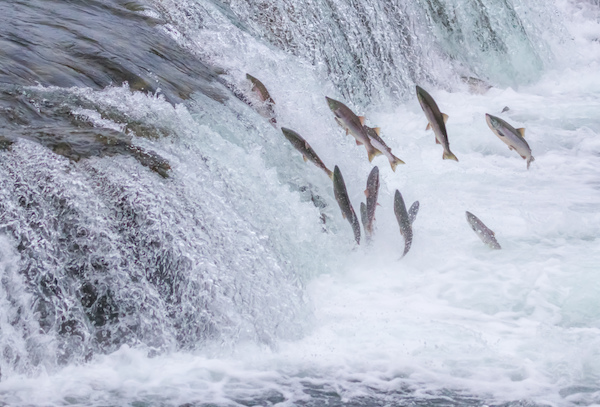 Commercially, the global salmon trade is dominated by farmed Atlantic and wild Pacific species with their distinct flavors, textures and color range—from dusty pink to apricot orange. The 2 million tons of Atlantic salmon produced through aquaculture and the 1 million tons of wild-caught Pacific salmon play a vital role in food security, but while the Atlantic species has risen to assume a special place with consumers, almost transcending the seafood category, it’s widely thought that Pacifics could have much greater market impact than at present.

Thanks to a supply that has grown by more than 400% in the past 25 years, Atlantic salmon is one of the top three most popular seafoods in the western world. Consumption of this fish is also rising at a rapid rate in many other regions—successfully competing with other proteins like beef, pork and poultry. Much of its ascendance has stemmed from the fact that it has changed with the times and capitalized on emerging food trends. This in turn owes as much to the sophisticated processing that’s now in place as it does to the advancement of salmon farming.

As prized as Pacific salmon species are by loyal consumers in core markets, it’s the relative lack of investment in advanced processing technology that has to-date put these fish on a much less dynamic trajectory from their farmed Atlantic cousins. As such, many products are failing to meet today’s consumer needs.

The Pacific Ocean is home to six types of wild salmon, with the five species of king or chinook, pink, chum, sockeye and coho being the focus of commercial catchers. While the United States accounts for around half of the overall harvest, Russia has the second largest catch with approximately 40% of the total. These two powerhouses are followed at some distance by Japan, Canada and South Korea.

It’s well documented that Russian fish processing lags behind competing seafood nations. However, that landscape is now in transition, and the nation’s wild salmon is well placed to make a big splash in domestic markets and perhaps overseas. There are a number of reasons for this. Not only is the state very keen to raise the per capita consumption of fish, it has also introduced policies to modernize and increase the country’s added-value production rather than to send raw materials overseas only to bring final products back at heavily inflated prices. Federal government funding has also been allocated to help ease the burden of purchasing modern equipment and elevating production capacity.

With the ongoing trade embargo on imports from the United States, Australia, Iceland, Norway and the European Union continuing to disrupt salmon imports into the Russian market, and authorities supporting ambitious plans to triple Russia’s aquaculture production by 2030, now would appear to be an ideal opportunity to throw out the outdated equipment delivering inferior end products and invest in modern capabilities—ones that can do justice to Russian fish and make it much more competitive.

There’s also a strong case for US seafood companies to follow a similar investment policy. In the US, Pacific salmon has iconic status—think of the Bristol Bay or Copper River fish. But while Americans are eating salmon, much of it isn’t their own; it’s farmed and imported from Chile and Norway. It is also estimated that more than half of US-caught salmon goes overseas. Some of this goes for processing, often to Asia where labor is cheaper, and then shipped back. However, a growing proportion is now remaining in those markets for local consumption.

Simultaneously, the US per capita consumption of seafood is dwindling. US fisheries are regarded as some of the most sustainably managed in the world. Therefore connecting American markets with their own fish but in the formats that today’s consumers now seek could be just the strategy needed to both rekindle the country’s processing sector and add more value to the resource.

To expand the value of the raw materials and deliver valuable returns to the fish processing factory it’s essential that equipment installed on future salmon lines are capable of optimizing yield and throughput while also ensuring premium quality and minimum maintenance downtime. At the same time, with the rising demand for more convenient, portioned products, the ability to quickly respond to changes in the market will help factories make improved gains.

Meanwhile, the vastness of Russia and the historical challenges related to transporting fresh fish over large distances—from source to certain markets such as the rich mining and gas region of Krasnoyarsk—no longer exist thanks to our SUB-CHILLING™ system and the extended shelf life that it provides. Furthermore, the correct handling of wild salmon in the Russian Far East, utilizing our sophisticated processing technologies opens up new opportunities for pre-existing companies to reach the huge, fast-growing Asian markets like South Korea, Japan and China.

At Skaginn 3X, we believe the sooner these advantages are leveraged, the sooner factories can capitalize on the unprecedented demand for salmon products. Moreover, Pacific salmon could quickly find itself on a similar path as Atlantic salmon—winning consumers in markets old and new.